Just discovered that the menu does not open on mobiles, or at least mine anyway. So I am going to create a link on the home page to the hikes.

First hike of 2021 completed and uploaded. I am trying to upload the link to route using Viewranger but not sure if it will work.  I'll figure something out.
Nearly finished uploading Crete 2019. Oh my Nora do I miss Crete. Not looking good for 2021. So let's be optimistic about 2022.
14.10.20

Have been updating recently.
Got all of Crete 2017 uploaded and started on Walks 2018.

​Just uploaded images from the Caves of Kesh and Keshcorran 2017.
Still have not touched the Photographs from Crete last year.
There is also about 4 hikes from last year, 12 from this year. Of the 12 hikes so far this year I reckon we scaled over 20 heights....no wonder I do not have time to write text and upload the images. Too tired from all the walking.

Long, long, long, Loooooooooooong over due update. Crete 2015. I reckon I had better get it up there as I am currently planning Crete 2016.

We did go walking last year and while I have loads reasons for not updating, keeping in touch etc. etc. there is possibly not a good excuse in the dozens I could manufacture so rather than bore you with little lies I will attempt to communicate a bit more frequently this year (who knows...that could be a lie...we will have to wait and see.
The photograph to the left is of our wander up Knock na Rae on New Years Day. I failed to bring my camera hence only the one shot taken with my kris kringle phone. We have Auntie Margaret, Rory (I will think of his second name) 3 ladies whose first or second names I cannot recall, John the Map, Anna (No Crows) Houston, Shane the Long Donnelly, Collette (the Flautist) Sheerin.
There was a better showing than the story the picture tells; It was a last minute decision for me to head up so by the time I arrived half the bodies were already on the way down.

Finally posted the last images for Crete 2010 (week 2).
Someday I might add the text.

I finally posted the text for the last day of Crete 2008. While this was not my most eventful airport journey, (I think that was in 2006 and involved a car breakdown (me), last minute taxi dash, car crash with a police car (not me or the taxi I was in), not being able to withdraw cash from atms, meeting an old friend in the airport, being asked by air crew staff and security to take a later flight and extra stopovers because my seat was broken, taking a wrong road home and ending up in Belfast city suburbs at 3 am: but that is another story). This journey is, if I say so myself, interesting, true I do not have Douglas Adams' talent but I was influenced by him.

I had to find some pictures I had taken with the sky being the theme.

I heard tell it is good for you

Images added to Crete 2010 (some samples below)

Homemade (grown) images directly below (explanations may follow) and images added to Aughamore Bay in Sligo, Places of Interest

Holy Well / Tobernalt added as well as 2 images added to Aughamore Bay in Sligo, Places of Interest and text added to Crete 2008 Day 12

Text added to day 11 of Crete 2008 and also added text to Bluetit in birds.

Below we have the alternative to walking the dog.....

Text added to Swiss Valley in Walks 2009, Changed the images (and some of the text) ,took away those awful numbers, on day 2 in Crete 2008 and also changed the look of the site. Please leave a comment and let me know what you think.

I am hoping that somebody will be able to tell me a little about the rock formations below. It is the one in first four images that I get asked most about, the fifth image is a type of Sandstone that forms part of the cliffs on the third (nudist) beach over from Galini, the next two are the rock formations at Triopetra, the last was also taken there and was a very hard (with obviously a soft center) black stone embedded with seashells.
If you can shed any light on them can you leave some info in the comment section.
Many thanks.  Bobo 03/05/2010

Just added a blog, I think this means that you can now leave your comments. I also added the text to day 10 of Crete 2008

Finally have all the walks up to date regards images and hope to add the text sometime between now and the end; I hear you ask what end, I do not know either, I just hope that when I reach it I have the sense to stop and have a rest.
Anywho the image to the left is of myself sailing down to work for the first time, that is the first time i sailed to work and not the first time I worked.

Incase you ever wondered where the Bobo came from: this is my nephew Fionn on the left and apparently when he was one, two or whatever age it is that people start to talk he thought Bobo sounded like Padraig.  I did state when starting this site that it would contain some useless information.

Just came across this quote on a forum and had to share:
'If you make everything idiot proof, evolution will just make a better idiot'

The last updates include Day 8 in Crete 2008 (complete; images and text). Images of Blackcap in Birds. in Walks I have added text to Kings mountain and added the images of our Swiss valley walk. 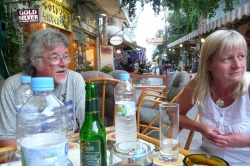 My idea for starting this website is to share my photographs and some useless information.
To view a higher resolution of the images click on a photograph and if you move the cursor to the right or left side of the image you should see the next or previous sign.
The reason for the bemused or amused look on Viv's face is due to the fact that Mick has just told her that he has the deeds that prove he owns the island of Paximadia just off the shore from Galini. Imagine that; somepeople or even most people think it belongs to Greece.

Thanks Janet and Martin for the answer, Kaqo Saktouria. I was wondering because Mum has just finished a painting of it and she wants to be able to put a name to it.
Can anybody tell me is the village below Kato Saktouria or Saktouria? Took the picture when driving back from Agios Pavlos if that is of any help.
If you know can you email me at bobojnr@yahoo.co.uk